The home front housewife had many new challenges when World War II began. Shortages and rationing made cooking challenging due to having to learn new recipes with new ingredients and new ways of cooking. Those changes also led to changes in how packed lunches were planned and prepared. Leftovers from meals the night before were used in new and creative ways. Housewives became especially adept at planning meals with those leftovers in mind. Working men needed one type of lunch while school children might need something else entirely. And don’t forget that the housewife herself needed to eat, too. That had to be planned with the packed lunches so food wouldn’t be wasted.

I want to do a short series on Victory lunch boxes over the next week or so, then I’d like to add a regular lunch box post that will explore recipes, planning, tips for packing the food, advice on the best lunchboxes and Thermos to keep your food safe and fresh, and suggestions for lunch box menus for all types of people that might need to carry a meal with them during the day.  I will definitely include period recipes for different lunch box foods.

One of my favorite sources is a 50-page pamphlet from 1943 called 300 Helpful Suggestions for Your Victory Lunch Box. It’s called a “hook-up cook book” because it was designed to be hung at eye level so the cook could more easily read the recipe. The hole in the center of every page was created to be hung on small nails that the housewife would attach to her upper cabinets or a shelf. This also kept the cookbook protected from splashes and dirty fingerprints.

This first page has an introductory passage that speaks directly to housewives. The first lines suggest that careful food management will win the war. “Food management, one of wartime’s most important jobs, rests squarely on the shoulders of the American homemaker. Food will win the war and make the peace only if it is administered wisely by the meal planners of the nation so that supplies will be adequate to meet the ever-increasing demands.”

As with many other wartime publications, women were encouraged to do their part to win the war from on the home front. The passage says this is a way that housewives can contribute directly to winning the war. And they weren’t wrong, Women banding together to make sure rationing and other programs worked really did help contribute to victory.

My next post will start this series, but for now, I’ll leave you with a sandwich filling recipe from the pamphlet I mentioned above.

1/4 c. peanut butter (We used creamy since we were adding in chopped peanuts.) 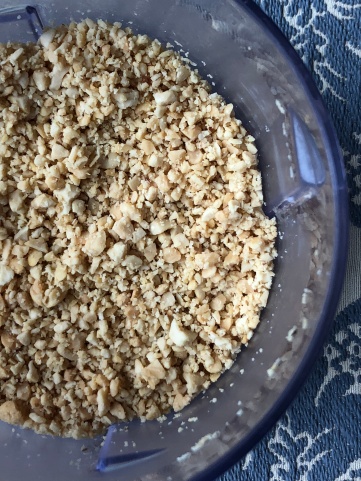 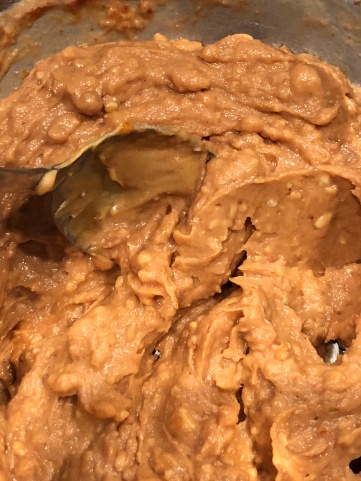 We toasted our bread first, then spread a layer of the filling on one slice. We were all a little hesitant to try this sandwich, but it ended up being pretty tasty. The chopped peanuts gave it a nice crunchy texture. The peanut butter wasn’t too thick due to the addition of the cream and chili sauce. I could taste the chili sauce, but it surprisingly complimented the peanut butter well. My husband added jelly to his and said that the combination of the sweet jelly and the chili flavored peanut butter was wonderful.

This would be a great option for a lunch box sandwich. The protein from the peanut butter and the carbs from the sandwich would be filling.

I’d recommend trying this one. It’s super easy to mix together and is a nice change from traditional PB&J sandwiches. 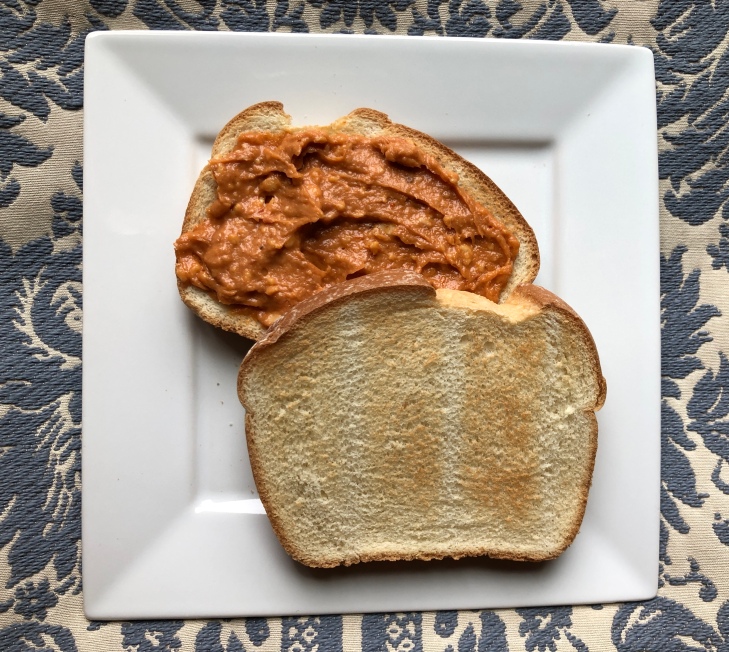 Gold Nugget Cake, 1940
More Upside-Down Cakes, 1940
Here is part of today’s First Monday Menu. You can find more menus from this article on my blog. The link is in my bio. This is from the March 24, 1944 issue of The Family Circle. This is when Family Circle was still a free weekly grocery store periodical. It was full of news, entertainment, homemaking advice, recipes, and product ads. These menus are from a menu round up Julia Lee Wright, a prominent home economist and author, compiled. Family Circle’s final issue was published in December 2019.
As promised, here is the finished tomato soup cake. The frosting is just a basic cream cheese frosting with cream cheese, confectioners’ sugar, and vanilla. The cake was drier than I thought it would be. You can see in the image how it crumbled when I sliced it. I don’t think the dryness really hurt it, though. It was a typical spice cake and had no tomato soup flavor at all. I was worried about a full cup each of walnuts and raisins, but it ended up being the perfect amount. All of my testers liked this one. I’d make it again. You can find the recipe on my blog. Link is in my bio.
Tomato Soup Cake 1940, Part 1
This is a great article from the February 1943 issue of Woman’s Day. The attitudes toward eyeglasses were quite a bit different than they are today. In the article, the author suggests only wearing your glasses when you absolutely have to so you aren’t known as “the one with glasses.” Contact lenses are mentioned here, too. I did a bit of quick research and found that people were indeed wearing contacts for short periods of time. Let me know what you think of the suggestions here. There’s a larger version on my blog. Link is in my bio.
×
Loading Comments...
Comment
×
%d bloggers like this: