One of a home front housewife’s jobs was to pack lunches for her family. Her husband, if not at war, would need a lunch for work. Her children needed packed lunches for school. If she was part of the growing number of women working outside the home, she would need a lunch herself. Of course, packed lunches weren’t the only option Americans had for lunch, but they were a great way to save money, stretch food, and make sure every member of the family had a nutritious meal three times a day.

Many magazines and cookbooks included menus that provided leftovers to be used the following day in a lunch box. This soup could be part of an evening meal and then put in a small vacuum container the next day and tucked next to a sandwich or some fruit in a lunch box. This kind of soup was especially good for lunch boxes because it was hearty and filling. Add some bread and you had a meal that could get you through an afternoon at the factory or at school.

1 lb split peas (you can also use Navy beans)

a piece of red pepper pod 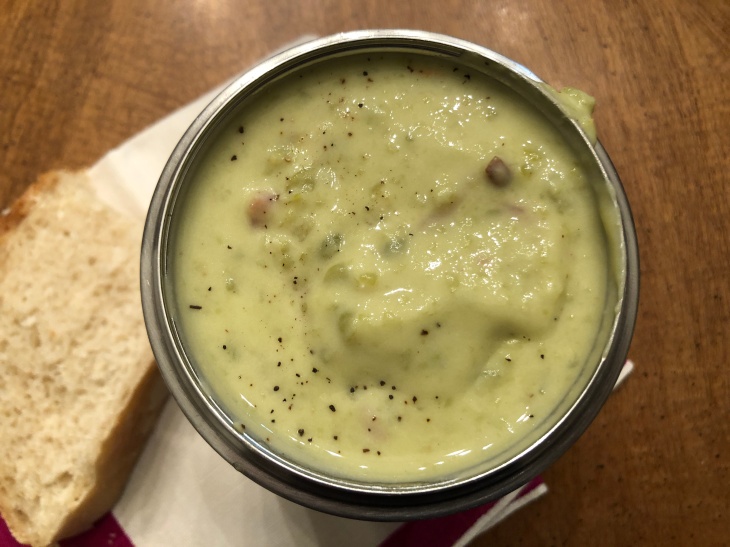 I used red pepper flakes instead of the red pepper pod. I also only used about half of an onion. We all peppered our individual bowls of soup. I also made the soup one night and then reheated and put it in a small thermos the next day to see how it would be in a lunch box.

The first night the soup was delicious. It was thick and warm and made a filling meal with the addition of bread.  Having had a chance for the flavors to mingle overnight, the second-day soup in the thermos was even better. I added some homemade bread that my teenage daughter baked, and had a satisfying lunch. I think that adding some fruit, a sandwich or a dessert would help anyone get through their afternoon without a need for a snack.

This recipe comes from a 50-page booklet that was specifically written for housewives who needed ideas for packing and planning lunches. It’s from 1943 and is part of a series of “Hook-up” cookbooks. There is a hole in the middle of each page that allows the housewife to hang the booklet at eye level. This helps keep the booklet clean and makes it easier to read the recipe. The picture on the front of the booklet shows the soups packaged for lunch boxes in waxed paper cups.