One of the challenges during the war years was creating menus that were varied, healthy, and appealing. As time went on, more and more commonly eaten foods either became scarce or were subject to rationing. Women’s magazines, newspapers, and cookbooks frequently contained articles or chapters with information and tips for meal planning with changing food availability.

The early 1940s saw many specialized publications aimed at teaching women to can, plant a Victory garden, or care for specific appliances, for example. These ranged from small pamphlets to larger softcover books and booklets. Many of these not only included information about canning or refrigerator care, but also contained recipes, meal planning tips, and menus. These publications were distributed by appliance companies, energy companies, and so on to both promote their business and offer help to homemakers.

Today’s menu comes from one such booklet. It’s the ABC of Wartime Canning by Josephine Gibson. In the foreword, Gibson explains that she wanted to include recipes to help homemakers create meals regardless of what was rationed or scarce. The copy I have seems to be a sample copy showing where you could have your company information printed on the cover prior to distribution. 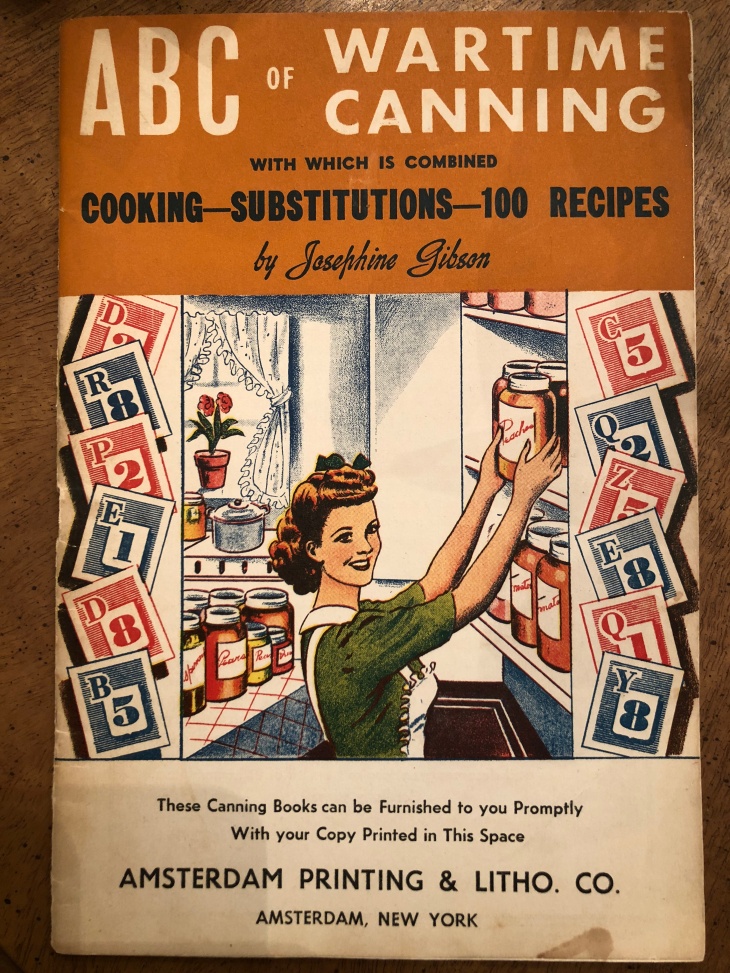 This booklet is full of interesting information. I’ll write a post on it in the near future. Today’s menu comes from a page titled “A Week’s Point-Saving Menus for a Family of Four (at a Moderate Cost)”. I chose a lunch menu because I think sometimes lunches are more difficult to plan, especially when it needs to be quick, yet healthy, or when the entire family might not be home.

Addie from @sugaraddies was on hand to help me out again. We scrambled eggs with chopped red pepper and onion. The onion and pepper could have been store-bought or grown in a Victory Garden. Many people raised chickens, too, so the eggs might have been from home instead of the store. There were shortages of eggs at times, but they were never rationed in the United States.

We sliced a loaf of French-style bread, buttered the slices, and toasted them lightly in the oven. 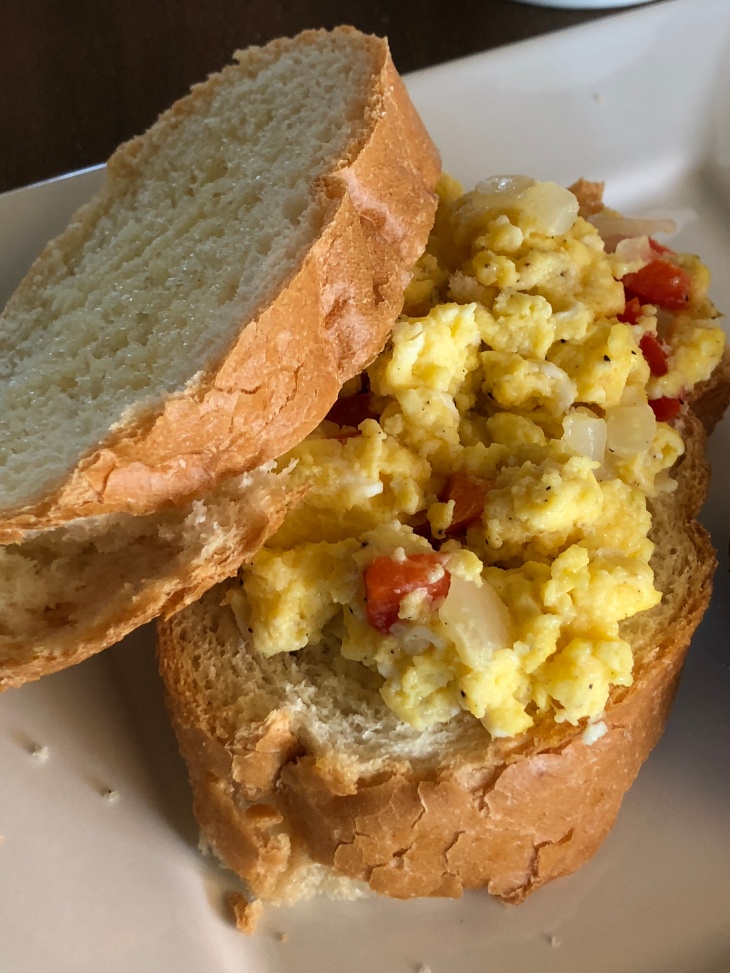 We used a baked apple recipe from The Good Housekeeping Cook Book as a starter.

Core the apples, then pare them to about 1/3 of the way down from the top. Arrange in a baking dish. Boil the water and the 1 cup sugar together for 10 minutes and then pour this mixture over the apples. Bake at 350° until tender. Baste frequently. Cooking time depends on the apples. It might take up to an hour. Sprinkle 1 tsp of sugar over each apple.

Put the pan under the broiler and baste often. Watch them carefully until the sugar melts and the apples are a light brown. Serve hot or cold with plain or whipped cream. Corn syrup can replace half the sugar.

If desired, the apple peelings can be cooked with the sugar and water for 10 minutes to color the syrup. Remove after this step.

Using the above recipe, add a cooked prune, a cut-up pitted date, or raisins just before sprinkling with sugar and placing under the broiler.

We sliced our apples in half and scooped out the core. We added raisins and brown sugar when we sprinkled the sugar over each apple. 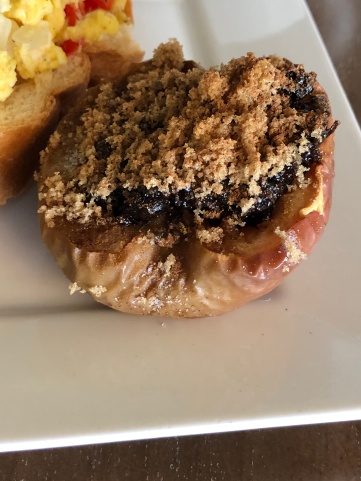 With the addition of cocoa, this would make a filling lunch for a cool or rainy day. I like that this menu used several things that could have been grown at home or purchased without using ration points. It’s also a meal that would appeal to adults and children. Those baked apples are a delicious treat!

Notice that the recipe for the baked apples include a note that corn syrup could be substituted for half of the sugar in the recipe. This was to offer the housewife a way to stretch her precious sugar rations.

Finally! A war-time cake recipe that is really, truly yummy! This one is from a 1943 Betty Crocker recipes, menus, and hints book. Lots of similar cake recipes use molasses or maple syrup in place of rationed ingredients, but I’m not as big of a fan of that flavor. This recipe didn’t use either ingredient and was still really moist and delicious. The amount of raisins was perfect. The spices were just right. I’ve been looking for a recipe like this for a while. I recommend it! If you make it, check the cake before the 50 minutes are up. I only baked this one for 45 minutes.
Yesterday’s First Monday Menu, 1943
Wesson Oil’s “Quik-Change” Dressing, 1943
It’s about that time again! Where I live people are planting their gardens. On my blog today I have a 1943 article about how to plan your Victory Garden. There are frequently asked questions answered in the article. Will there be enough seeds? Will fruits and vegetables canned at home be rationed? What tools will I need? I have a small yard. Can I still have a garden? It’s an interesting article that shows what people were thinking about when it came to gardens and feeding their families this time of year in 1943. The link is in my bio.
Vegetable Soufflé, 1941
Wonder what would have been in the theaters this week in 1944? My blog has a trio of reviews, and links to watch them today. One of the movies is Danny Kaye’s debut “Up in Arms.” I’m watching all three this week. Watch with me and let me know what you think of them. 🙂 Link is my bio.
×
Loading Comments...
Comment
×
%d bloggers like this: