Making the blueberry pie for the Summer Lawn Party turned into quite the pie adventure.  As promised, here is the recipe and the experience my daughter and I had troubleshooting it.

We followed the recipe exactly, using frozen blueberries as suggested. Here are the ingredients.

Pastry for a two crust pie

We thawed the blueberries to try to keep the pie from being too watery. We lined the pie with dough for one crust, and put the berries into the pie. We sprinkled the pie with the flour and brown sugar, then dotted it with butter. We then dusted the cloves over the top of the brown sugar. We cut a few slits in the top crust and placed it on the pie. We baked it for 15 minutes at 450 degrees, then reduced the temperature to 350 degrees and baked for another 30 minutes. 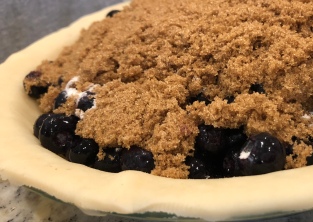 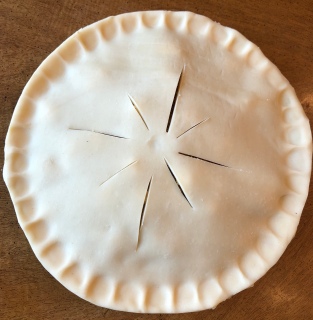 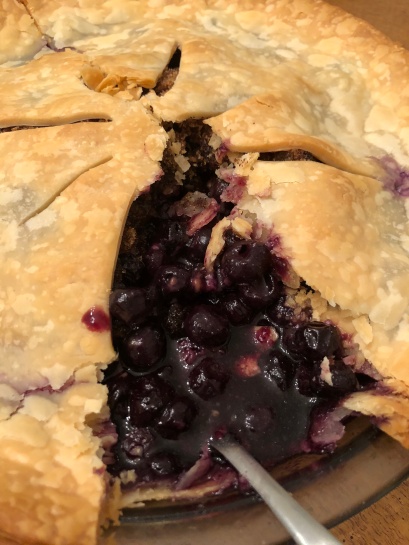 The pie turned out incredibly runny. It had a really nice spicy- sweet layer right below the crust from the brown sugar, cloves, and butter. We definitely needed bowls when we ate this. It was a nice balance of sweet and a bit tart. The textures of the crust, blueberries, and the brown sugar layer complimented each other well. We finally decided to use the pie as an ice cream topping, and try the recipe again with some adjustments to the ingredients.

For the second version, we used fresh blueberries and changed or added the following ingredients.

We mixed the flour and cornstarch into the blueberries, but kept the rest of the recipe the same. The resulting pie was still runny, but not quite as watery as the first pie. It still had a nice layer of the sweet brown sugar mixture, and was ultimately used for ice cream topping again due to the consistency of the filling. 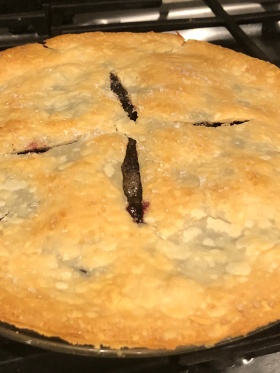 For our final pie, we purchased cans of blueberry pie filling. Everything else in the recipe was the same. We had hoped the canned filling would help thicken the consistency of the blueberries, but the third pie also suffered from the same watery filling.

The pies were delicious. Despite the runny filling, the flavor was just right. The winning part of this recipe is the brown sugar and clove topping right beneath the top crust. Adding this pie to ice cream was a big hit. We used both a vanilla and a blackberry ice cream. It made a perfect summer dessert. Even my one year old wanted more, so I count it as a success. I’d make this again just to use it for a topping. It definitely didn’t work as a pie for us.

Do you have suggestions on how to thicken the filling? We’d love to hear them and would try this recipe again to test them.

Since this week brought us National Book Lover's Day, I thought I'd add a list of books that were published in 1940. It's been a while since I have done one of these lists, and this time I added children's books to the mix. You can see my entire list on my blog today. Link's in my bio. And, yes, Caps for Sale is on the list.
The American Woman’s Cook Book is one I find myself reaching for again and again. Since today is National Book Lovers Day, I’d love to hear what your favorite vintage cookbooks are. They don’t have to be from the 1940s. Any decade is fine. What are your favorites and why? Do you have a favorite recipe from them? I’d love to hear from you!
Here are some picnic recipes from the July 1939 issue of Woman’s Day. I thought these would make a fun First Monday Menu for the end of summer.
I used this black-eyed pea recipe to finish off my series on the USDA’s shopping guides from 1942. It’s got a bit of a kick to it and would work great with almost any meal. You can read more about the individual charts over on my blog. The link is in my bio.
Look at this almost perfect sample of shelf paper from 1945. I love it! Do you still line your shelves with paper? Did you in the past? You can see the entire page it is on on my blog. Link’s in my bio.
It’s that time of year again! To celebrate 4 years of History in the Kitchen, I’ve rounded up some favorite wartime recipes all in one place. You can find them all, including this wonderful pear cake, on my blog today. Link’s in my bio. Thanks for sharing the past 4 years with me!
×
Loading Comments...
%d bloggers like this: